Last night, I brought eldest kiddo to see The Laramie Project: Ten Years Later at The Warner Theatre‘s Nancy Marine Studio. I wish more parents had brought their teens and tweens. In fact, that room should have been overflowing with people, extra performances added to the schedule due to overwhelming demand. School field trips, with projects for school credit and conversations held about what this community chooses to also rewrite in its own history. 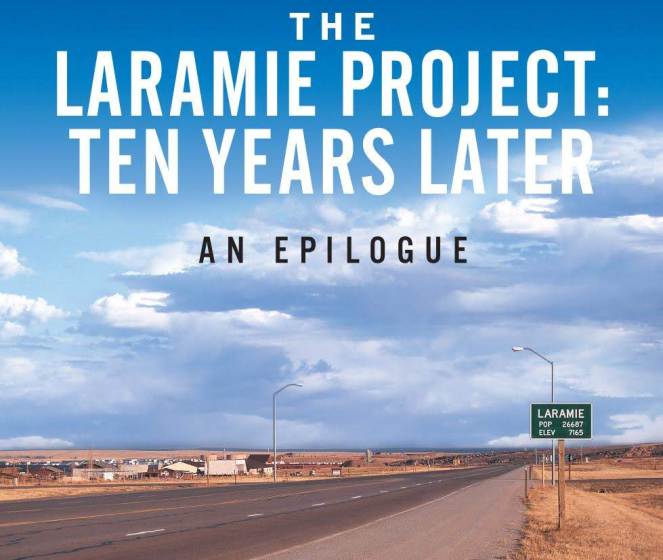 The cast consisted of members of The Warner Theatre Center for Arts Education Performance Lab, the eldest students in the arts education program. Teens, ranging from 15 to 18 years old, brought to life the series of interviews conducted by the Tectonic Theatre Project in 2008, 10 years after the brutal murder of Matthew Shepard. What they found was change…and not. A community willing to put the past behind them…and some demanding for change that should have happened.

Jake Asheim, who was tasked with playing the roles of Moises Kaufman (member of Tectonic Theatre Project), Jim Osbourne (friend of Matthew Shepard) and Russell Henderson (one of Matthew Shepard’s murderers) was spell-binding. His timing and patience with each of these roles shined. Conio Lopardo slipped seamlessly between Governor Freudenthal, Jim Osborne, and, most eerily of all, Aaron McKinney (Matthew Shepard’s murderer). Suspension of disbelief is essential in live theatre, and Lopardo successfully pulled this off. His version of flippant, remorseless McKinney brought out all the feels in me and I was astounded such could be pulled off by a 15-year-old. Emily Russell’s Reggie Fluty was passionate and full of life. This was a truly talented cast and they performed a very difficult piece in a very impressive manner.

I cried because I’ve watched The Laramie Project on HBO, so I knew some of the back story. I cried because Matthew Shepard was around my age. I cried because the comments from the members of the community echo so much of what’s relevant today. I cried because, in spite of The Matthew Shepard and James Byrd, Jr., Hate Crimes Prevention Act of 2009, hate crimes persist. Every year, hate gains ground. It feels more and more hopeless, even with tools that were supposed to decrease these numbers. I cried because, even though in June 2015, the Supreme Court ruled that same-sex marriage is legal in all 50 states of the United States, current administrations are trying to erode that right–are doing their best to take away what was already given. I cried because so much ground has already been lost.

Please. There are two more performances of this important play. You can catch it Saturday, February 2, 2019, at 8:00 PM, and Sunday, February 3, 2019, at 2:00 PM. Bring your kids. Bring your parents. Bring tissues. Just go. 10 more years have passed since these interviews, and I fear what another update would bring to light. Laramie could be anywhere. Torrington could learn some lessons from this.

Tickets can be purchased on the Warner Theatre website or from their box office two hours before each performance.

Published by The Mom Who Ruins It All

View all posts by The Mom Who Ruins It All

2 thoughts on “10 Years Later, Nothing Has Changed”

This site uses Akismet to reduce spam. Learn how your comment data is processed.